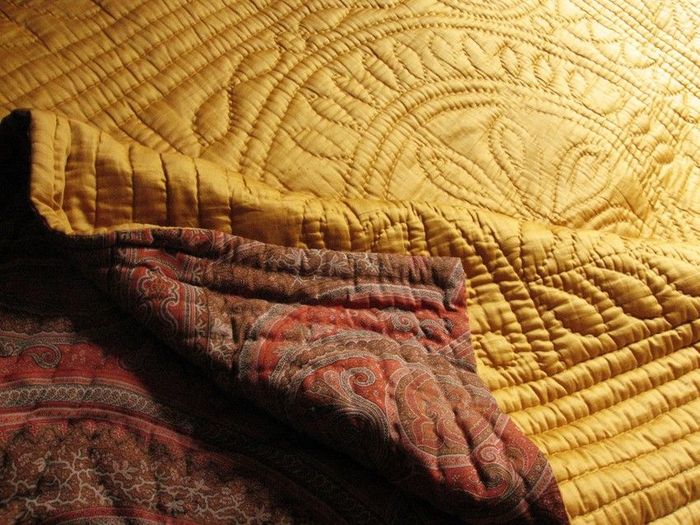 Hand-stitched matelasse bed cover/coverlet in a marvelous state of preservation with one side in a dark gold solid color cotton with a slight sheen and the other in a very fine antique wool paisley in tones of persimmon, rust, black and pale grey. Paisleys, very popular in France and England beginning in the early 19th century, were first made in the Kashmir region of India and later produced in Europe. However, when the shawls fell out of fashion in the mid to late 19th century, they were recycled in various ways, as wall hangings, articles of clothing, or as in this piece to make a bed cover. This particular paisley is likely Indian and ports a signature in its central medallion. The quilting of the piece is all hand-stitched in a stylized floral sunburst motif which partially follows the pattern of the paisley and renders very well on the dark gold side. Despite its age of about 150 years, this coverlet is in excellent condition with no wear to the fabric. There is just a bit of fading in the central black portion of the paisley and some quilting stitches that need to be reinforced (visible in the photos). Judging by its weight, my guess is that it's filled with a fluffy wool. A stunning piece as well as a collectible antique document that will enhance any bedroom! Dimensions: 86 x 82in.