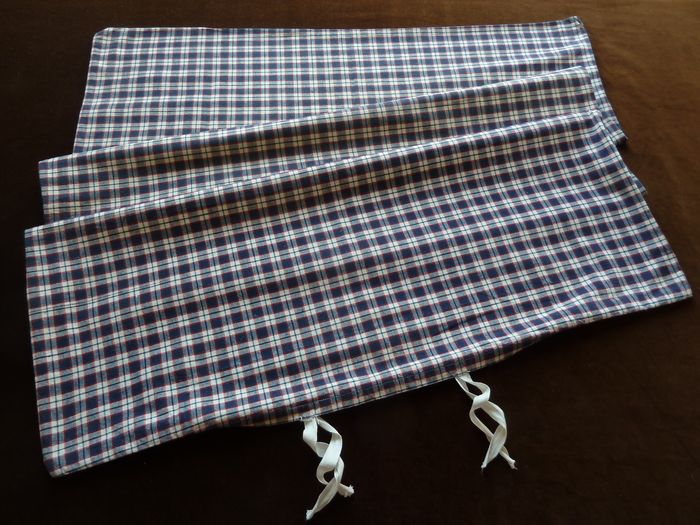 A wonderfully Country French pair of oversize vintage bolster shams made in plaid kelsch with a dominant blue pattern. Kelsch, a fabric that was typically produced in the Alsace region of north eastern France, was used to make both eiderdown covers and long bolster shams. Characterized by simple plaid and checked patterns in various combinations of red, blue, white and brown, kelsch is traditionally made of pure linen but there were also linen/cotton variations as well as its hemp equivalent which goes by the name of verquelure. This particular pair of shams is made of a linen/cotton blend and served either as long pillow shams or for placing at the edge of the bed as foot warmers, however their rustic attraction could equally charm on a guest room bed, a couch or even on the floor of a child's room. Each sham closes at one extremity with its original ecru cotton ties. Likely dating from the early 20th century, this pair of large shams is in perfect, as-new condition. OF NOTE: a third square sham in the identical fabric measuring 32x30in. is available upon request. Dimensions (slightly different for each sham): 44 x 30in., 46 x 32in.