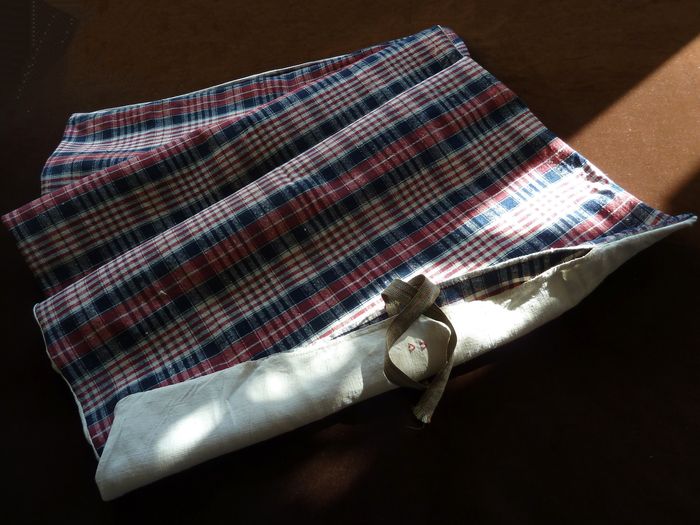 A wonderfully Country French oversize antique bolster sham made in plaid hemp kelsch with a dominant red and blue pattern on top and solid off white hemp for the underside. Kelsch, a fabric that was typically produced in the Alsace region of north eastern France, was used to make both eiderdown covers and long bolster shams. Characterized by simple plaid and checked patterns in various combinations of red, blue, white and brown, kelsch was traditionally made of pure linen but there were also linen/cotton variations as well as its hemp equivalent which goes by the name of verquelure. This particular sham is made of a pure, rustic plaid hemp thus it's technically verquelure, and not kelsch. The cover originally served either as an extra large pillow sham or for a small eiderdown that was placed at the edge of the bed as a foot warmer, however its rustic attraction could equally charm on a guest room bed, a couch or even on the floor of a child's room. The sham closes at one extremity with its original khaki and blue striped cotton ties and has a small red cross stitched monogram, CC, near the opening. Entirely hand sewn and likely dating from the mid to late 19th century, this oversize antique sham is in excellent condition on the plaid face. There are two original L-shaped hand stitched repairs on the white hemp underside measuring approximately 2" each (see photo). OF NOTE: possibility of replacement of this bottom panel with another in perfect condition for an additional $135. Dimensions: 49 x 27.5in.