Embellishment of personal and household linen as well as vestments of the church, started with what is known as "Punto Tirato" or drawn work, and there is little difficulty in tracing the evolution of this same drawn work into its final phase, known as lace.
The drawing of these threads in greater or less quantities naturally led to the use of a great variety of stitches, among which the satin and curl stitch, or surface embroidery, were used to a great extent, with the "Punto Tagliato" or cut work (where a piece is cut directly out of the material and filled in with a needle stitch), and so on, in various forms, gradually getting further from work on the linen and giving greater attention to the drawn threads. 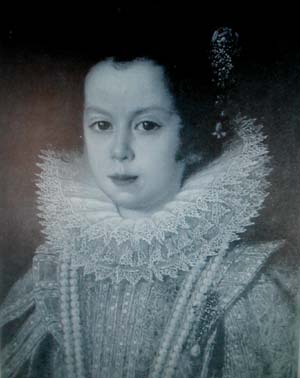 Then comes the next step known as Reticello; this is simply the outcome of the continuous drawing away of the linen until nothing of it visibly remains. It is the name given to the geometrical borders seen in great quantities of Italian work, which by the few perpen­dicular lines, to which the connecting link of the linen itself may be easily traced, paved the way in this last great step in linen work for the "Punto in Aria/' or the earliest example of what is now known as lace 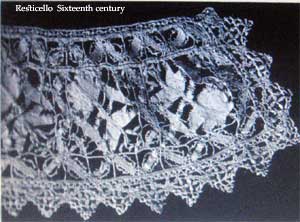 "Punto in Aria" (stitch in the air), as the name implies, is the final breaking away from any link with the linen material. Its first use was in trimming of various altar cloths, albs, etc., of cut and drawn work. It was made in the form of edges and insertions and closely resembled in stitch and design its forerunner, Reticello. The edge was generally pointed, the sharp being of the earlier period and the shallow, more rounded scallop showing the Spanish influence, belonging to a later date. Some authorities put all Venetian lace under the general head of '"Punto in Aria," but I prefer here to call them by their individual names, applying the term "Punto in Aria" only to the earliest stage between Reticello and Gros Point.
From the edges it was but a short and quick step to the lace or beautiful Venetian Points which we know today under the names of Gros Point de Venise, Point I Mat de Venise, Coralline, Rosaline and Venise a Reseau.

The first or heavy Venetian Point made with the variation of the buttonhole stitch became richer in design, more complicated in stitch as the workers became more efficient. The design, though large, is grace­ful, and the foliated pattern which is used so much in later Italian lace is seen here for the first time.  There is no background, though in some examples the "motifs" are held together by "brides" or bars made of a fine buttonhole stitch. The heavy cordonnet buttonholed over at various intervals brings out the pattern and is one of the main characteristics of this lace.
The solid parts are made up of a variety of designs, the stitches at times being so close as to give the effect of a linen material, while others are made of open-work designs, checks or other patterns.

Following the Gros Point came the flat Venetian or Coralline, very unlike the heavy point in appearance, having its smooth surface unornamented by either the cordon-edged or picoted flowers. It has no special design save the graceful entwining lines which readily remind one of the coral branches from which it derives its name

The Rosaline comes next and its exquisite workman­ship makes it among the finest and most sought after of all the Italian laces. It borrows something from both of its predecessors, for while closely resembling the Gros Point in conception, the pattern is much daintier and smaller, making the effect one of airy lightness.
The designs are held together by innumerable tiny "brides" which in turn are profusely ornamented by small rose-like flowers, the edges of the flowers as well as the "brides" are decorated with myriads of little picots, varying of course with the quality of the lace; this gives a raised effect, which is very beautiful.
A type of fine, flat Venise is also called Rose Point, though the rose from which it derives its name is only found ornamenting at intervals the "brides" or bars with a tiny picot-edged circular flower, the main body of the lace resembling the Coralline.

The Venise a Reseau, or grounded Venise, belongs to a considerably later date than the Venetian Points. When Colbert founded the great lace industry in France in 1665, it did not take long for the beautiful Alengon and Argentan laces to find their way into Italy. The beauty of the fine needle-made net or mesh wfrich formed the ground work of these laces, charmed the Italians and they soon set to work to copy this wonderful new ground or Reseau. The result was the combination of the needle point designs, the flower and foliated patterns of the other laces and the fine mesh which the Italian workers soon learned to make. This was called Venise a Reseau.  Examples of this exquisite work arc rare 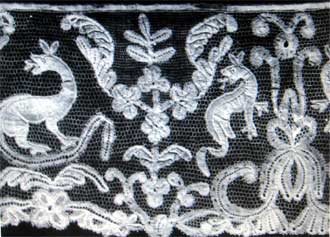 In describing the Venetian points we have touched on the best known and most sought-after of the needle-made Italian laces, and we now turn to the bobbin-made laces of Milan, which, by their beauty, give ample proof that the women of Milan were as skilled in the use of their bobbins as were their sisters of Venice in plying the needle.
The Milanese lace of the sixteenth and seventeenth centuries, was a flat, tape-like lace, very open as to pattern and generally following little or no design, save the curving circular lines often joined by "brides" and called "flat Milan."
A close examination of this lace will readily show the reader the distinct difference between the toile or solid part of bobbin lace as compared to the needle stitch in Venise.
The next step in Milan was the same tape-like design applied to a somewhat circular mesh ground, and with this came the freer use of "motifs," such as figures, animals, coats-of-arms, etc. By these various designs one can usually determine the century in which this lace was made, the more ornate and detailed the pattern, the later the period. Thus the scrolls and foliated designs of the Renaissance gave way to figures and flowers of the eighteenth century. 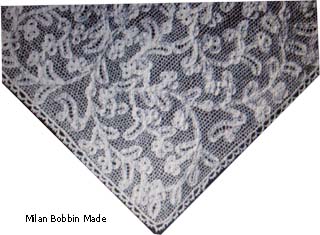 In all "Milan" lace the background or mesh was worked after the "motifs" (which were made separately and arranged in the desired pattern). The mesh is also bobbin-made and generally large and open.
There was a great demand for this lace owing to its adaptability to all ecclesiastical vestments, altar cloths, etc., which called for a durable and washable lace, but
unfortunately this very demand was the cause of the market being flooded with an inferior quality of this lace which, while resembling the other in pattern, was made with a bobbin-made tape that followed the design like an outline instead of making each "motif" on the pillow. This can readily be detected as the tape is either turned or gathered to fit the pattern, while otherwise the toile would smoothly follow the curves of the pattern guided by the bobbin. There is probably a greater variety of Milan than almost any other lace, as it varies from the large flat, scrolling design with a great deal of toile and no ground, to the similar design connected by "brides," then the small fine toile with many brides, on to the later Milan, where the many motifs are joined by the large round mesh in its various degrees of quality 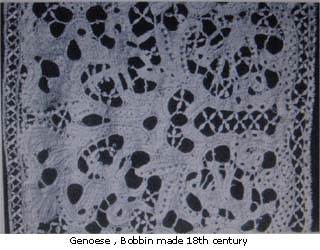 Although Italy is most famed for its two widely different types of lace represented by Venetian and Milanese, we must by no means ignore the work of the Genoese lace makers, who contributed so much to the lace industry of their country.
Like Milan this lace is made with the bobbin, although unlike the Milan it copies the design and patterns of the Venetian needle point. Its distinguishing feature, however, is the constant use of the flower design com­posed of petal-like "brides" in the shape of a cross within a circle and called the "Genoese Rose." This geometrical motif recurs constantly in the patterns and is easily recognizable. So skilful were the Genoese workers in imitating with their bobbins the early Venetian patterns found in the fifteenth and sixteenth century pattern books, that it is often only by close observation that they can be distinguished from the needle points of Venice.
The name of "point" incorrectly given to this bobbin-made lace undoubtedly originated from the fact that the best known laces of Genoa were made in deep points and scallops as they were used to such a great extent for edging the ruffs and collars of the period 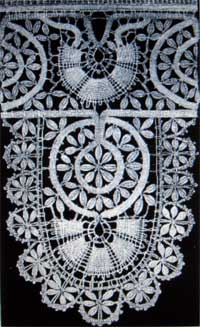 We are putting Burano last in the list of Italian laces. not because it was the last to take up the industry, but rather because it is the one center which, right up to the present day has continued extensively the making of lace, combining in its schools the reproducing of all types of lace, Italian, French and Flemish. These laces were made so skilfully as often to rival their models and defy detection by all save connoisseurs. The many laces such as Alengon and Argentan of the French and any number of the Flemish points are copied in great quantities. One distinguishing feature of the work of the Burano school is the cloudy, rather streaky effect of the mesh or reseau.
This reseau, which in the French and Flemish laces is clear and light, when compared to the Burano readily shows the difference of texture. This result is obtained by a certain method of throwing the thread to one side in a manner quite different from that done by the needle workers of other countries, and accounts for the per­pendicular lined appearance of the mesh. The name "Burano" does not apply to any one par-l icular lace, as is the case with all other names, although the Venise a Reseau or grounded Venise was generally accepted as being most characteristic of Burano