Lace has a long story in France. At the time of Henri III (1551-1589) wearing lace was already very fashionable at the King's court. 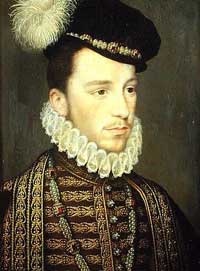 Many portraits show the king with a lace collar (Italian lace or le Puy lace). But it wasn't until the time of the Regency of Marie de Medici (1610) that lace fashion became a true frenzy. Most lace at the time was imported from Italy. For a woman it was of the utmost importance to wear the absolute most expensive lace she could find. 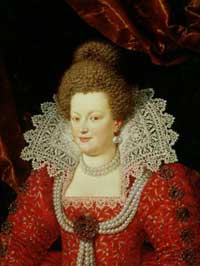 The king had become concerned at the enormous amount of money spent on lace and embroidery by the French aristocracy, and had promulgated sundry and diverse edicts which aimed at checking this reckless expenditure on imported luxuries. Sumptuary laws proved hopelessly ineffectual in checking the import of costly lace. Realizing the failure of the policy of prohibitive edicts, Colbert, the King's minister, changed this plan and adopted the more rational one of fighting the foreigner with his own weapons. 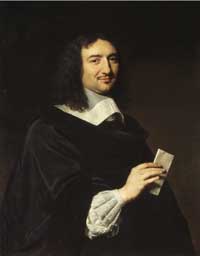 To this end he decided to encourage and improve lace-making in France in every possible way. In pursuance of this very sensible idea Colbert communicated with Monseigneur de Bonzy, Bishop of Beziers, who was then the French Ambassador to the Venetian Republic, and on his advice and with his aid some twenty or thirty skilled lace-workers were sent from Venice to France and settled as teachers of their art at Alençon, a town already famed for its cut-work, and where Colbert's daughter-in-law had a chateau. A monopoly or " exclusive privilege" for ten years was granted in August, 1665, to a guild or company, and an office and shop were opened in Paris at the Hotel de Beaufort for the sale of the laces produced. The company established groups of workers at Sedan, Arras, Le Quesnoy and other towns besides Alencon, and all the laces made in these places and under the control of the company were known collectively as "points de France." 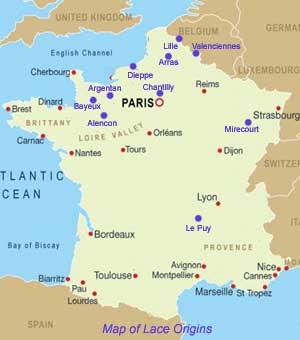 Alencon, in Normandy, was chosen by Colbert in 1665 as one of the seats of the new manufacture, because the lace industry was already widespread among the peasants. Point coupe had been made there at an early date, possibly introduced by Catherine de Medicis. The "points de Venise" were successfully imitated and introduced into Alençon. The supremacy of Alençon among French laces is no doubt due to this long apprenticeship in lace-making.

Alencon point has a ground of small hexagonal meshes

The Alencon point is made with the finest linen thread ( after 1850 cotton was used sometimes.) Until 1700 the Alencon point was executed on a net of "bride bouclée." .After 1700 the "point plat" was used because customers wanted a lighter lace. 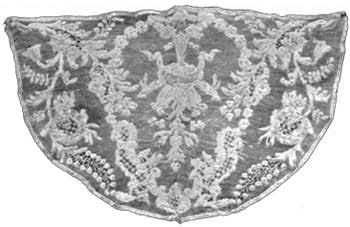 The term "point de France" is applied almost exclusively to needle-made lace that was manufactured principally at Alencon. 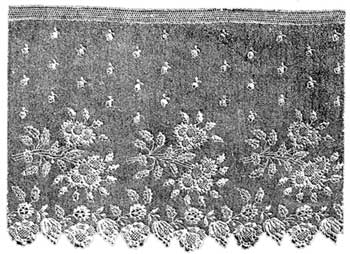 The needle-made ground of Alençon point was strong and durable, unlike that of the Brussels or grounded Venitian. The mesh was often of two sizes in the same pattern, and was composed of two threads, held together by a third. The 20th century Alençon point ground is simply a fine mechine net, the pattern being appliqued on the net. 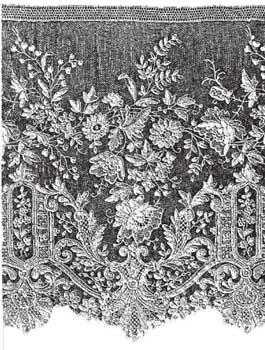 Bobbin lace was already made in Arras in 1602 and distinguished for its gold lace, one English name for which, orris or orrice-lace, is said to be a corruption of the name of the town. Under Colbert's scheme it is probable that thread-lace of the Flemish type was produced in Arras, but the kind that is best known under this name is strong, rather coarse and much like Lille, except that the straight edge almost invariably characteristic of the latter lace is replaced by a definitely scalloped one. Arras lace continued to be popular during the Empire, and its manufacture was carried on, although on a steadily dwindling scale, until the late 19th century.

Even if Argentan made lace before 1665 the development of their lace industry came primarily from the fact that Alençon needed subcontractors to meet the demands of its success. Nevertheless Argentan developed its own style, increasing the size of the net and using the button-hole point and later using a "bride tortillée" by twisting thread around each of the six brides that form a single mesh. The lace industry collapsed after 1685 as one third of the population that was protestant left France to launch their industries elsewhere. Lace makers returned in 1708 with Pierre Montulay. There were few studios in Argentan (no more than four) and none of them were very large.

Argentan lace was famous for the beauty of design and the strength of of its ground that made the lace almost imperishable.

The earliest laces made at Bayeux were of a very light description and included mignonette, a narrow lace with a clear ground, much in request for caps and head-dresses, and point de Marli, a lace with a fine ground, generally powdered with square dots, and a straight edge finished with loops. Sometimes the net was additionally ornamented with sprigs worked with the needle. These laces were much in fashion between 1765 and 1785 and were produced in great quantities not only in Bayeux but in other towns in the neigh­boring region. Late in the eighteenth century Blonde was the chief lace made, and soon after the whole industry almost died, but recovered itself in 1827 when heavy silk laces began to be made for the Spanish market. In comparatively recent times, thread-laces in the style of Mechlin have been the principal manu­facture of Bayeux together with a heavy needle-point lace with brides, called point Colbert in honor of the famous minister. 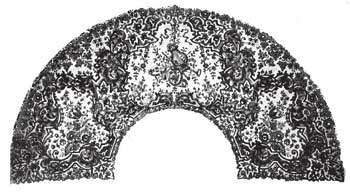 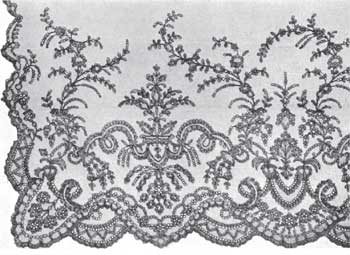 The silk lace to which this town has given its name was first produced in the early years of the eighteenth century, but long before this a school of lace-making had been started in Chantilly by the Duchesse de Longueville. What kind of lace was then made is not certain, but it is most likely that it was something in the way of point de Paris. The manufacture of silk bobbin-lace was a later introduction.

The grounds used in Chantilly were the Alencon ground and the "fond chant", an abbreviation of Chantilly or the six-pointed star ground of the old point de Paris, but often combined with it is the fond simple or fond clair of Lille. This latter reseau is, as a rule, worked into the spaces of the pattern along the edge of the lace. There is a cordonnet made of a thick, untwisted very shiny silk thread. Chantilly was greatly esteemed by French ladies of rank and fashion and is mentioned over and over again in Royal accounts and inventories. Natur­ally it fell with its patrons, but its manufacture was revived under the First Empire ; it again became the mode and remained in favor for many years. Made of black silk it was particularly popular between 1830 and 1840, but by that time the great proportion of lace made in the Chantilly style came from Caen, Bayeux and Le Puy. 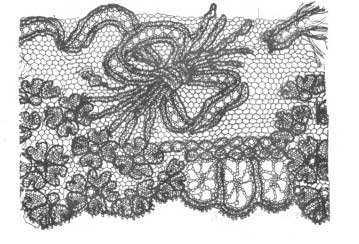 How to distinguish between real and machine made Chantilly Lace?

In the case of real Chantilly, the loops on the edge will be part of the lace. In the machine made lace, these will be sewn on and easily pulled away.

There was a considerable lace industry at Dieppe during the eighteenth century, and several distinct varieties were produced, the best known being point de Dieppe, which had some resemblance to vraie Valenciennes, but was simpler, required fewer bobbins, and was made in a long strip which was wound round the pillow as the work progressed; dentelle a la Vierge, much used for the wonderful caps of the Norman peasant women, and Ave Maria lace. The distinctive features of dentelle a la Vierge are its small stiff patterns outlined with a flat thread and its reseau known as " cinq trous ". Ave Maria lace is very narrow, has a plaited Valenciennes ground, a straight edge and very insignificant patterns. It continued to be made up to the middle of the nine­teenth century. 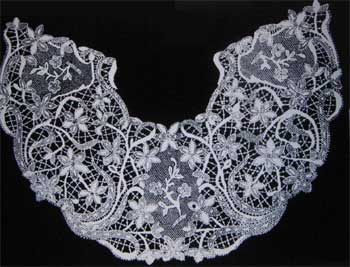 Le Puy-en-Velay has been for over two centuries the centre of the great lace-making district of the Auvergne. A light and open “guipure" was produced very early in the history of bobbin-lace, but in the seventeenth century the staple manufacture seems to have been a rather coarse and inartistic thread-lace, which was employed to trim household linen. Although the industry was carried on on a large scale throughout a big district it does not appear to have been uniformly prosperous, as there is evidence to show that in the first years of the eighteenth century there were many bitter com­plaints of bad trade and applications for the remission by the Government of export duty, from the lace-makers, who also asked for grants in aid of the unemployed workers. About 1760 the manufacture of Blonde lace was introduced with the result of a prompt improvement in trade, and from this time onwards the lace industry in Velay was a flourishing one; a variety of laces—silk, wool and thread, black, white, and colored—have been produced in the district. Cluny lace, which was recently very popular in England, originated in Le Puy.

Lace was made at Lille at the end of the 16th century. The design is very close to the Flander's one. The ground of Lille lace is fine and transparent with a hexagonal mesh, a reseau known as "fond clair", four sides of which are formed of two twisted threads ; the threads of the remaining two sides being only crossed, not twisted. The edge of Lille lace is invariably almost straight, never markedly waved or scalloped, and the formal patterns are out­lined with the thick, flat, shiny thread which English lace-workers call gimp or trolly thread. The reseau is often powdered with little square dots known as points d'esprit. Lille lace survived the Revolution, but in the 19th century its most distinctive features had disappeared, and the patterns of the lace then being made were more or less in the style of the later Mechlin laces. 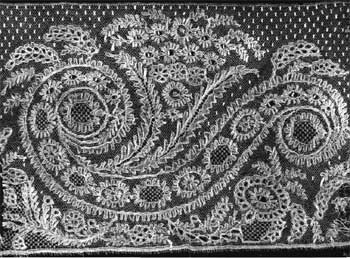 Mirecourt bobbin-made lace resembles that of Lille or Honiton. Lace has been made in the neighborhood of Mirecourt since the seventeenth century when Mirecourt lace was a French guipure of more delicate texture and varied design than other guipures.The first guipures were made with hempen thread. In the end of the 19th century flowers and sprigs imitating the Brussels patterns were attempted with great success at Mirecourt.

The finest of all French bobbin-laces, the world-famed Valenciennes was first made at the town which gave it its name, towards the end of the reign of Louis XIV. It originated apparently at Le Quesnoy, a town which was one of the lace centers under Colbert's ordinance of 1665, but where a lace manufacture of some kind had been established by a colony of Antwerp workers. For the second part of the 18th century Valenciennes lace was the rage in France. Any woman would save for years to purchase her favorite lace to adorn her cap! With the French revolution the manufacture of the lace in Valenciennes ceased. Valenciennes lace was then made elsewhere.

The most noteworthy characteristics of early Valenciennes lace, are the flowing scrolls and graceful lower motifs of the design, and the mixed reseaux, two, or even three, being introduced into a single example of lace closely inter­mingled with the pattern. 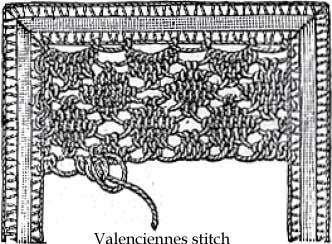 Of these various reseaux, by far the most effective is the fond de neige, ceil de perdrix or snowflake ground, similar to that of Argentella lace, but, of course, worked with bobbins instead of with the needle, in which each of the irregular, spidery meshes has a dot within it. 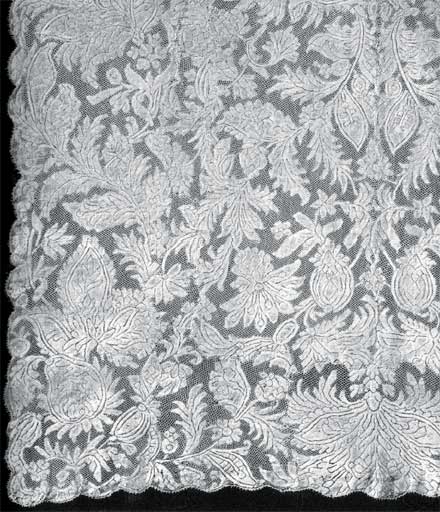 The linen thread used was extremely fine and expensive. The "Brabant" region where Valenciennes is located, has always been known for the quality of its flax, one of the finest in the world.