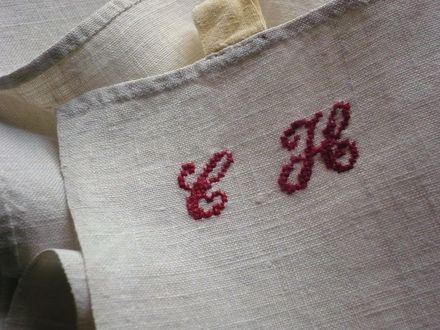 A beautiful example of linen fabric 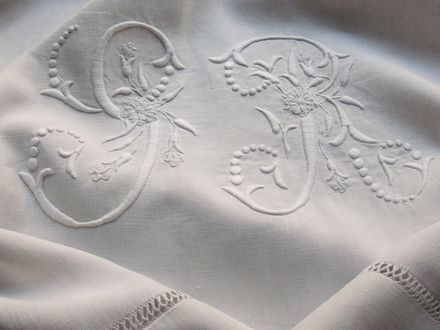 The botanical name of the flax plant is linum usitatissimum. The English word, linen, is derived from the generic name, linum, and the term lint, from the old Scottish word, lin.

Flax grows wild in Egypt and is cultivated all over the world. Botanists claim that there are at least one hundred species of the plant, with flowers of various colors, some yellow, white, flesh-color, red, and blue. The plant of the linum usitatissimun consists of a single stalk, growing from twenty to forty inches high, the average height about thirty inches; of a green color, with leaves alternating on the stalk; crowned with a beautiful blue flower of five petals sometimes called the fugitive flower, because the petals fall almost as soon as the blossom opens. Plutarch writes that the reason the Egyptians used the flax plant, with the blue flower, for cloth, was because, "the universe itself is surrounded with the ethereal blue of the sky." As soon as the petals of the flower fall, the seed bolls are formed; in each section, two cells are formed, each boll containing ten shiny, dark brown seeds. The seed has a medicinal quality, being used for poultices and flax seed-tea; the outer coating contains a mucilaginous substance, which has properties that are soothing to inflamed membranes. The seeds are used for making linseed oil; first they are bruised, then heated, and subjected to hydraulic pressure, when they yield from twenty to twenty-seven per cent oil. This oil is especially valuable for varnishes because of its drying properties. When the oil comes from the press, it is termed "raw oil," when subjected to heat, "boiled oil." The remains of the seed, after the oil is extracted, is made into a cake much used for fodder. When the flax is grown for seed, it is sown thinly, in order that the stalks may throw out a great many branches, and yield a large crop of seed. The fiber of the plant grown for seed is coarse and useless for fine materials. 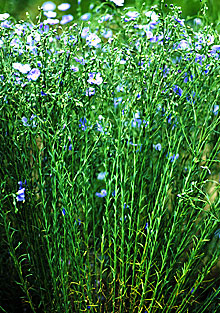 To produce a good crop of flax fiber, great care is taken in the selection of the seed, which should be of the previous year's growth. The best seed comes from Riga — it is a Dutch seed. The ground should be carefully prepared, dry, of sandy loam, with strong sub-soil - the climate, temperate and moist. It is sown in the early spring — April or May, and reaped in August when the stalks have turned two-thirds yellow. Flax yields a better quality of fiber after a rotation of crops, such as grasses, oats, potatoes, and wheat; the same ground should not be used but once in six or eight years. It is necessary to harvest the flax by hand; the stalks are tied carefully and stacked in the open fields. In Germany, where the seed is saved, it is taken from the stalks by drawing them through a coarse comb.

Flax is cultivated in Russia, Germany, Switzerland, Italy, Holland, Belgium, France, Ireland, England, Scotland, Greece, and America. Each stalk consists of a woody cylinder; outside of this and cemented to it, are the long, shiny fibers which are glued to an outer skin or bark. In order to separate these fibers from the outer skin or bark, the bark has to be retted or rotted away. There are several ways of retting flax. One method is to place the bundles of flax, with their roots down, in ponds; it is covered with straw and boards, and kept in the water until decomposition has liberated the bark from the fiber. This process is slow, requiring from ten days to two weeks. It has to be carefully watched, or the fiber will become too brittle if allowed to remain in the water too long. In Belgium the straw is placed in crates and submerged in the sluggish running river Lys, at Courtrai. The flax retted in this manner is of the finest quality, owing largely to the properties of the water.

Linen is one of the most interesting of textile fabrics because its history can be traced four thousand years, and because the flax fiber, from which linen is made, undergoes many and varied processes in the manufacture of the white and glistening material, honored by all men and nations. In tracing its history, the monuments on the banks of the Nile, and scriptural records, yield the most authentic accounts of its early use and manufacture. Egypt was famous for her beautiful products of fine linens; at one time the chief and most profitable article of commerce. Reproductions of the drawings in the tombs of Beni-Hassan, show the processes, from the sowing of the seed to the finished piece of cloth. ("The Ancient Egyptians," J. Gardner Wilkinson,' Chapter IX.) One of the most interesting instances of the use of linens is found in the wrappings of the mummies, large quantities being used in embalming men and animals; varying from the coarsest texture, like sail cloth, to the finest quality, which requires a microscope to discern the flax fiber. Fine examples are seen in the museums, which testify not only to the quality, but to the beautiful color designs woven in as borders. The mummy cloths vary from a few inches to one yard in width, and sometimes measure three hundred yards in length. These bandages also varied in fineness, according to the wealth of the deceased. White linen was used exclusively for garments of the priesthood and royal personages; the colored costumes, represented on the wall paintings, show elaborate designs in embroidery. The common people wore gowns of indigo colored linen. Herodotus describes a corselet presented by Amasis, King of Egypt, to the Lacedaemonians: "It was of linen, ornamented with numerous figures of animals, worked in gold and cotton. Each thread of the corselet was worthy of admiration; for though very fine, every one was composed of three hundred and sixty other threads, all distinct, the quality being similar to that dedicated to Minerva, at Lindus, by the same monarch." (Herodotus ii., 182, iii., 47.)

Pliny describes Egyptian fish-nets — "Some of them were so delicate that they would pass through a man's ring, and a single person could carry a sufficient number of them to surround a whole wood. Julius Lupus, who died while governor of Egypt, had some of these nets, each string consisting of one hundred and fifty threads." Portions of this kind of net have been discovered at Thebes. (Pliny xix., i.) The sail cloths made in Egypt were prized by the Syrians; they were frequently adorned with painted or embroidered devices. "The ship in which Anthony and Cleopatra went to the battle of Actium was distinguished from the rest of the fleet by its purple sails, which were the peculiar privilege of the admiral's fleet. The sails of the large ship of Ptolemy Philopator, mentioned by Atticus, were also of fine linen, ornamented with a purple border."

Flax needs a deep, rich soil, and, like tobacco, quickly depletes the nutrients from the land where it is planted. In early settlement days in Virginia, that meant it could only be raised on newly-cleared ground. After two or three years of a flax crop, a farmer needed to sow a less nutritionally-demanding crop, such as wheat. Later in the colonial period, farmers could incorporate flax into a rotation process which included heavy dunging or the sowing of cow peas a year or two before the next flax crop was to be planted.

After plowing in November, February and March, the ground was harrowed and raked fine. The small, oily flaxseeds were sown broadcast in April and a final harrowing took place. The closer the seeds were spaced, the less branching took place in the resultant plants and the higher the quality of the crop. If flax is sown properly, weeding is unnecessary because there is no space for unwanted plants. Flax takes about a hundred days to mature. When the leaves yellow and the seed turn brown, the flax is pulled from the ground by the roots, spread to dry for a few days, and, if time is not a factor, stored until the next year to age.

Processing flax is an extremely labor-intensive process, providing skilled and unskilled employment for both adults and children. First, the upper part of the flax bundles are drawn through coarse combs to remove seed in a process called rippling. After the seeds are removed, it is necessary to separate the long, silky inner fibers which constitute the end product from the straw and inner pitch. Retting, in which the unwanted fibers are loosened and decomposed, can be achieved in several ways. The flax can be left out in the field, where the exposure to the elements, particularly the moisture in the air, can do the work. A pond or through can be used to achieve the same effect in much less time, but with a prodigious odor. The ideal way to ret flax is to expose it to constantly running water, such as a stream. The amount of time this step requires depends on the quality of the flax, the temperature and numerous other variables. When the straw comes away easily from the few bent fibers, it is time to grass the flax. The bundles are untied and laid in a field for a few days until they are dried on one side, then turned so the other side can be dried. When the crop is thoroughly moisture free, it is stacked inside to age for a few more weeks.

Next, a series of steps free the linen fiber from the boon (unwanted plant material). The brake, a large wooden machine, is used to break down the trash material and loosen it further from the end product. Then the flax is scotched (beaten against a board with a blunt wooden knife). The final process is hackling, in which the fiber is drawn through a series of metal combs to remove the last of the boon and shorter fibers. The end result is a strick, a half-pound bundle of long, light grey fibers which resemble human hair. Over 85% of the plant has been removed before the strick is produced. Some of the shorter fibers removed during hackling can be used as tow for sacking or inferior cloth. Since flax is such a long fiber, special care must be given before spinning to keep it from tangling. A distaff is a tool which keeps the fibers separated and properly aligned during spinning. Thread is produced using the small wheel often called a flax wheel. An experienced spinner has little difficulty creating a fine, strong thread with flax. In order to produce a smooth yarn, however, she must also be able to moisten the flax continuously as she is spinning. After the thread is spun, it must be stretched and boiled to set the twist put into it by spinning. Bleaching can be done either before or after weaving, by exposing the fiber to sunlight for prolonged periods or using such chemical treatments as chloride of lime, soap and soda or lye water.

Our stock is far too extensive to display all at once.  If there is something that you seek but don't find on our website please don't hesitate to contact us.